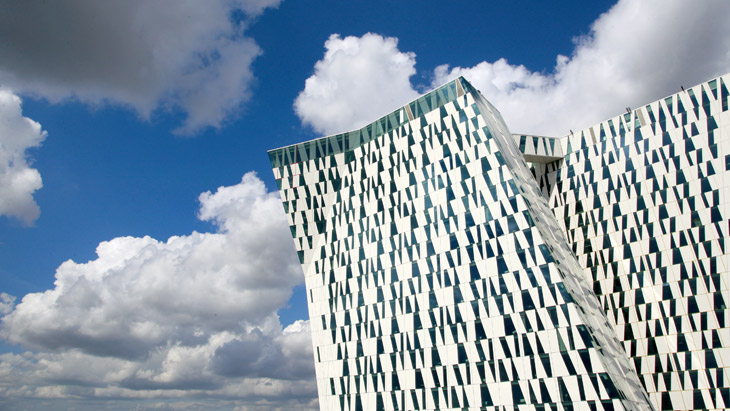 Bella Sky: a hotel in Copenhagen that is taking hospitality to a whole new level

The Bella Sky Hotel's two towers are interlinked in a dynamic motion, reminiscent of a dancing couple. With its 23 floors and geometrical design, the hotel's divergent architecture is a striking landmark on the outskirts of Copenhagen. The conference hotel, which opened in 2011, is located in the new district of Ørestad and, with 814 rooms and 30 meeting and conference rooms, it is the largest hotel in Scandinavia.

Its trademark feature is the way the two buildings slope away from each other at a 15-degree angle. The 76.5m towers move further away from each other the higher up they go, and are connected at the very top by an enclosed bridge, so virtually all the rooms can boast spectacular views. Particularly impressive is the Skybar, which has a view stretching as far as Sweden. Guests with a head for heights can book one of the corner rooms with slanted walls. Standing at the full-length window gives you the feeling that you are actually floating above the depths below.

Ørestad is an ambitious urban development project on the south-eastern outskirts of Copenhagen. This new district, which is designed for a projected 20,000 inhabitants and 60,000 jobs, is linked to the city via a metro system and is located between the centre of Copenhagen and the airport in the Öresund region. One of Europe's most modern trade fair and congress centres is affiliated with the Bella Sky.

To the Bella Sky Comwell Copenhagen website
Back to overview