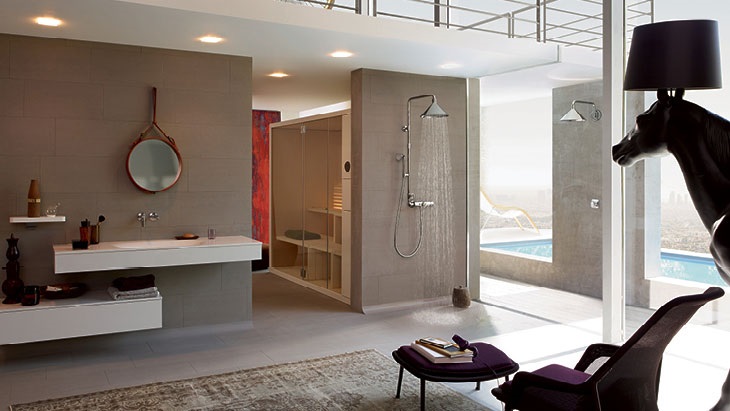 Their design is not typically Swedish or Scandinavian – it is experimental: Charlotte von der Lancken, Anna Lindgren and Sofia Lagerquist make up the designer trio Front. The name says it all: Front aims to promote design development, experiments with materials and technologies and is at the forefront of the international design scene. The designs play with visual effects, they provoke and they are the result of mutual discussions as part of a team effort.

The ShowerProducts for Axor are completely in keeping with their creative concept of putting a new interpretation on things that we are all familiar with. In the bathroom they unmask those elements that are normally concealed – the installation – and they enable us to experience the way that water is brought into the shower, in its most original form. This approach of using simple things in an innovative way, or more specifically of alienating them, is frequently found in the work of Front: the life-size Horse Lamp 2006, a coffee table in the form of a sculptured pig and the slanting Blow Away Vase, which looks as if it has been blown aside by a gust of wind. Front created an asymmetrical stack of drawers, which appear to balance at impossible angles. A housefly flying around a light bulb inspired the trio to come up with the filigree lampshade Fly Lamp. The charm of the creative studio stems from its pieces, which often have a poetic quality about them.

International awards won by the trio include the title of “Designer of the Future”, awarded by the renowned design fair Art Miami Basel (2006) and “Designer of the year”, awarded by Swedish Elle Deco and the German Architektur & Wohnen (both in 2010). Since then the trio have become successful exporters of Swedish designs. Clients include prestigious international brand names in interior design: among these Moroso, Porro, Established & Sons, Kvadrat and Stelton, and last but not least Ikea. Their work can be found in leading collections, such as the Museum of Modern Art in New York.

Anna Lindgren and Sofia Lagerquist first met when studying industrial design and went on to found Front in Stockholm in 2004 (at that time together with Charlotte von der Lancken). Since then, they have discussed and designed as a team – each member is involved in the entire process, from initial idea to product launch. In addition to objects for mass production, Front Design also creates many one-off pieces for collectors and galleries. Work from the design studio can be found in leading collections, such as the Museum of Modern Art in New York.

To the Axor ShowerProducts designed by Front
To the Front website