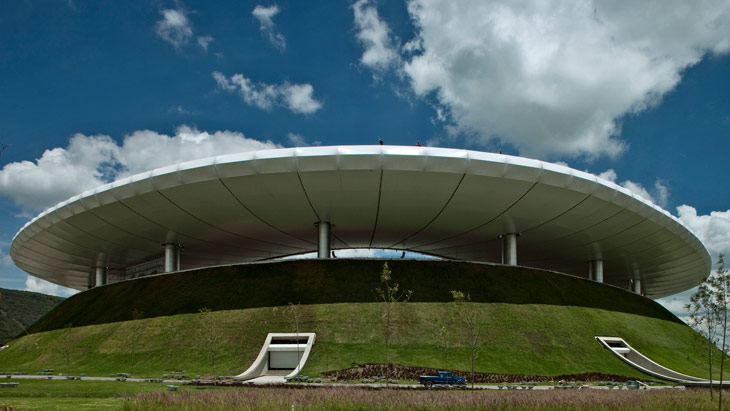 Most people associate volcanoes with images of threatening violence. Despite this, a harmonious balance of nature and technology reigns in the Estadio Omnilife near the city of Guadalajara and its more than one million residents. The person responsible is the prestigious French architect and designer Jean-Marie Massaud who constructed a 45,500-seater stadium for one of the most popular Mexican football teams. A great deal of green philosophy was incorporated into the construction project, which is situated 500 kilometres to the north-west of Mexico City.

The pitch and stands are embedded into a verdant hill with a volcano-like conical form. The use of rain water and energy-saving technology highlight the ecological standards achieved. The 8,000 parking spaces hidden in the base of the cone reconcile the major project with nature. A light-weight roof floats above the “crater” like a white cloud. When creating the new-build, Jean-Marie Massaud, whose designs are always inspired by nature, sought a connection with the surrounding landscape. His green volcano, appropriately furnished with fire-red chairs in the stands, harmoniously fits into a park-like landscape, which acts as an important recreational area for the nearby metropolis.

The Axor Massaud bathroom collection that he developed for Axor is to be found in the exclusive VIP boxes and the player dressing rooms also creates a connection with nature. For the bar area, Massaud selected the subtle, minimalist Hansgrohe Talis S kitchen mixers.

One more thing: until shortly before it was opened, the stadium was known as the Estadio Chivas, after the nickname of its home team C.D. Guadalajara, the “goats” (Spanish: chivas). It was opened in July 2010 with a friendly against Manchester United – the “goats” won 3:2.